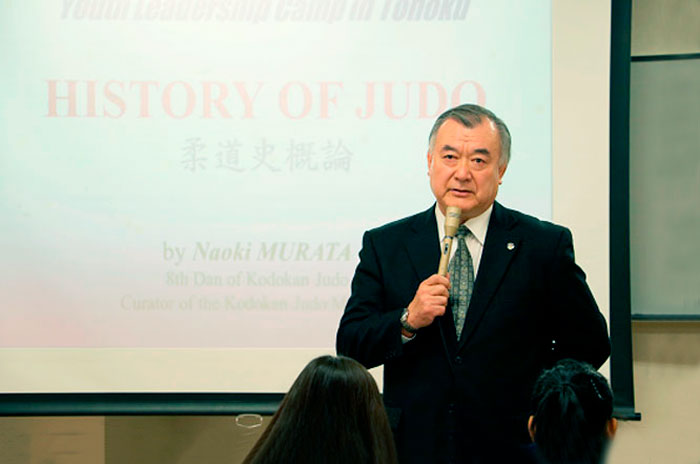 Based on purely political interests, Silvio Acacio forbids the curator and professor of the Kodokan Institute Judo Museum to participate on FPJudo Technical Accreditation

On November 9, the day when the whole world remembers the fall of the Berlin Wall, which occurred 25 years ago, Pope Francis launched an appeal at the Angelus in St. Peter’s Square in the Vatican:

“We need bridges, not walls. Let all the walls that still divide the world fall”. A few days after the appeal launched by the Holy Father, Silvio Acacio Borges showed that his administration is based on walls and systematic persecution of those who criticize his administration. 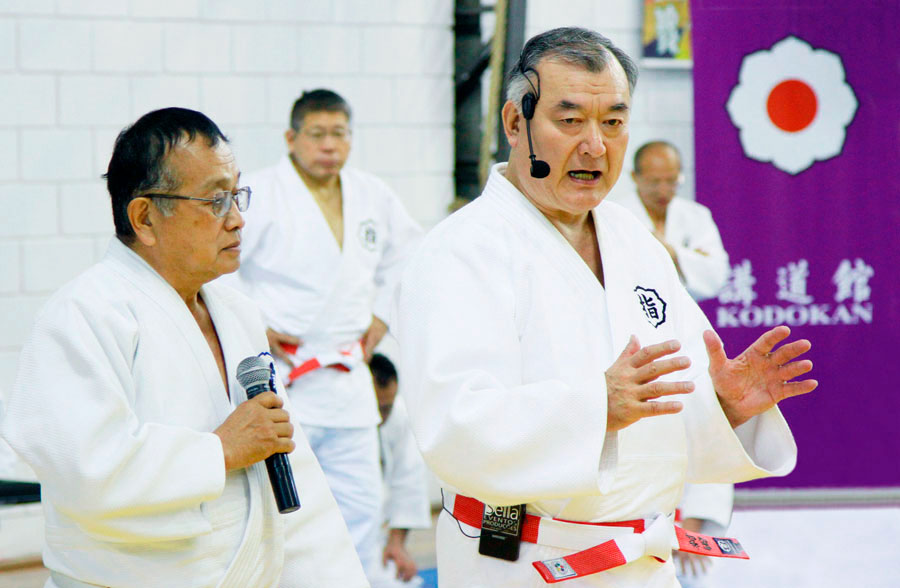 During the week leading up to the 2020 Technical Accreditation of the Sao Paulo Judo Federation (FPJudo), there was a lot going on behind the scenes given an absolutist rampage by the president of the Brazilian Judo Confederation (CBJ), who, in order to retaliate leaders who dare to challenge his misdeeds, was responsible for the most incoherent decision in judo history: to forbid an Japanese authority to participate on the event. An unprecedented and very serious fact that reveals the exact size of CBJ’s current management. 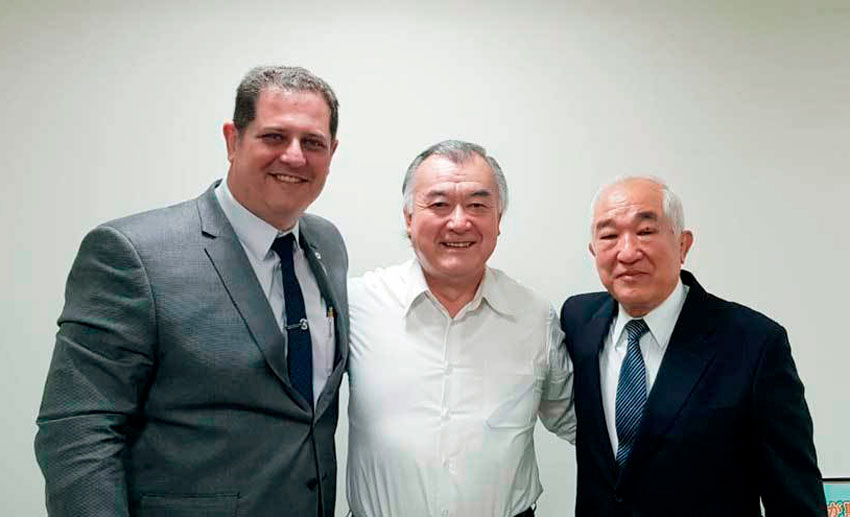 Alessandro Puglia, Naoki Murata and Takanori Sekine at a meeting held in October 2019 at the Kodokan Institute

Chronology of the facts

On the October 4th, 2019, a delegation with 20 judokas from the São Paulo cadets team arrived in Japan to participate on a technical exchange. Captained by Alessandro Panitz Puglia and Takanori Sekine, the athletes trained for three weeks at Budo University, the Kodokan Institute and Shutoku High School.

After 12 days of intense training at International Budo University in Japan, the team and the technical commission of FPJudô started training at the iconic Kodokan Institute. 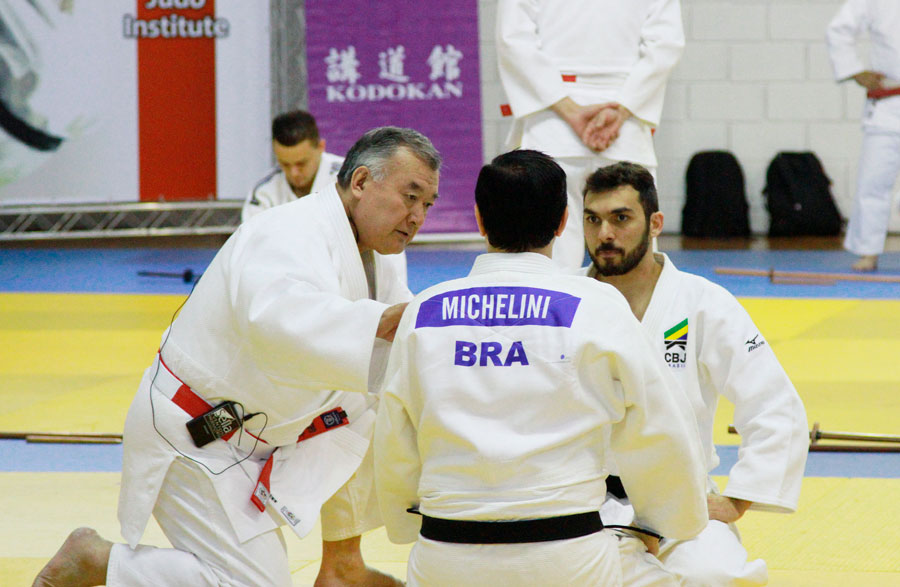 During the period in Tokyo, Alessandro Puglia visited executives from the private sector and representatives of the Ministry of Sport of Japan and of the Kodokan Institute. On that occasion, the visit to Sao Paulo of the renowned professor kodansha hachi-dan (8th dan) Naoki Murata, curator of Judo Museum and professor at the Kodokan Institute’s was mentioned with the objective of including lectures on the 2 stages of the 2020 Technical Accreditation in state of Sao Paulo. Once back in Brazil, Alessandro Puglia followed up with the visit request to the CBJ.

“On November 28, 2019, we sent the CBJ an authorization request to receive professor Naoki Murata. At that time, we had already done the official programming and even the script of sensei Murata, who would act in the technical accreditations of the capital and the interior, but strangely we did not get an answer”, detailed the Alessandro Puglia, President of FPJudo. 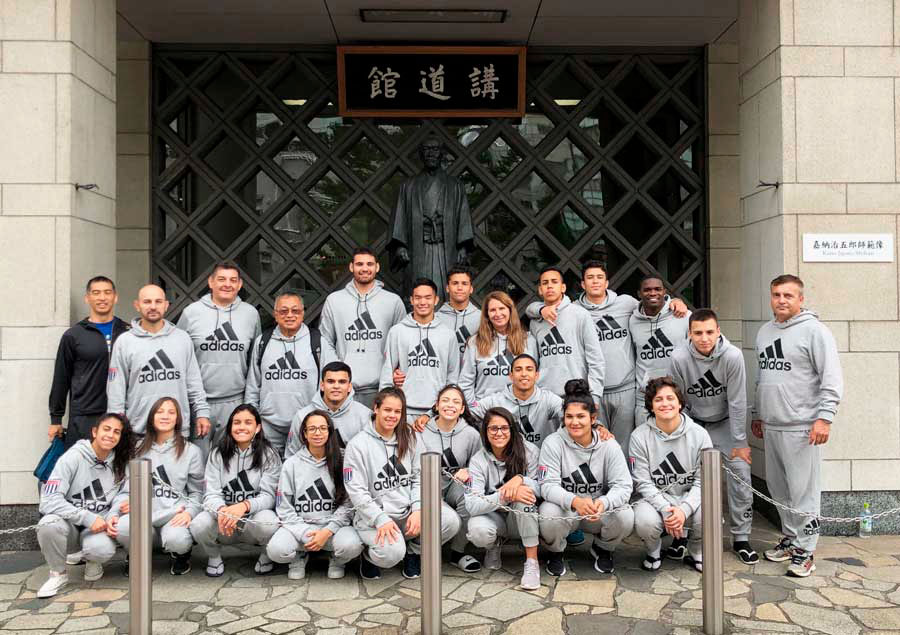 Seeking to purchase airline tickets earlier and organize the Murata professor’s agenda, on December 19, 2019, the FPJudo board reiterated the request made to CBJ, but inexplicably the São Paulo leaders were left unanswered.

“Due to the need for professor Murata to adjust his agenda and define the schedule of the lectures that would be held at this year’s Technical Accreditation, and given the urgency, we repeated our request for authorization, but it was also in vain”, lamented Alessandro Puglia. 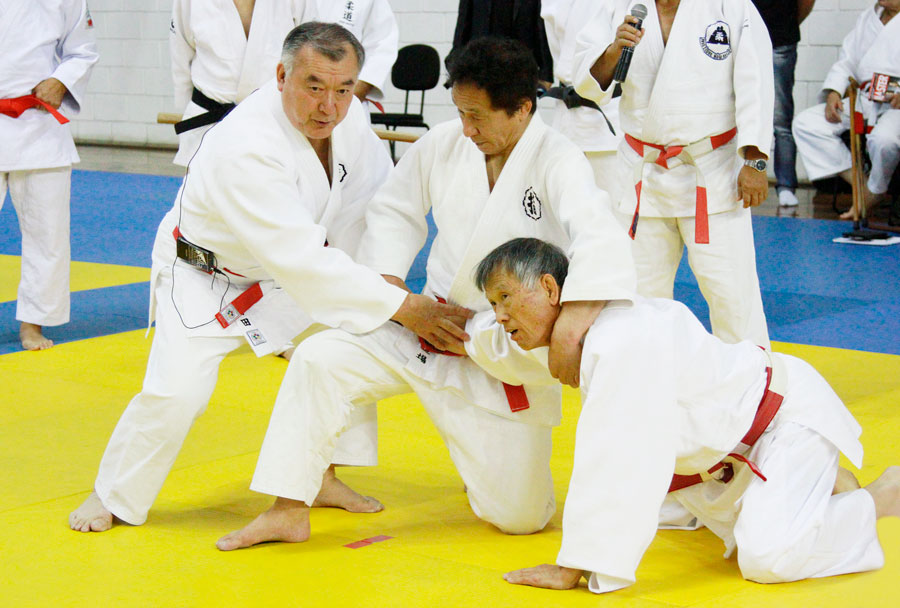 According to what we heard from the leaders of FPJudo, later Silvio Acácio Borges finally gave his final answer and definitively forbade the participation of the sensei Murata. His justification for such a grotesque, rude and authoritarian decision revealed to be of the exact size of his administrative view and the commitment that he has with the ethical and philosophical principles left by Kano, Jigoro shihan: “I am not going to authorize the arrival of professor Murata to Brazil because the São Paulo federation should have asked for authorization to do so before inviting him to come to Brazil”, ordered the all-powerful president of the Brazilian Judo Confederation.

In addition to disregarding the fact that the invitation came in an informal conversation between Alessandro Puglia, Takanori Sekine and Naoki Murata, when the FPJudo leaders went to the Kodokan Institute in October, Silvio carried out a very serious and disrespectful aggression against a direct representative of the school founded by Jigoro Kano in 1882. 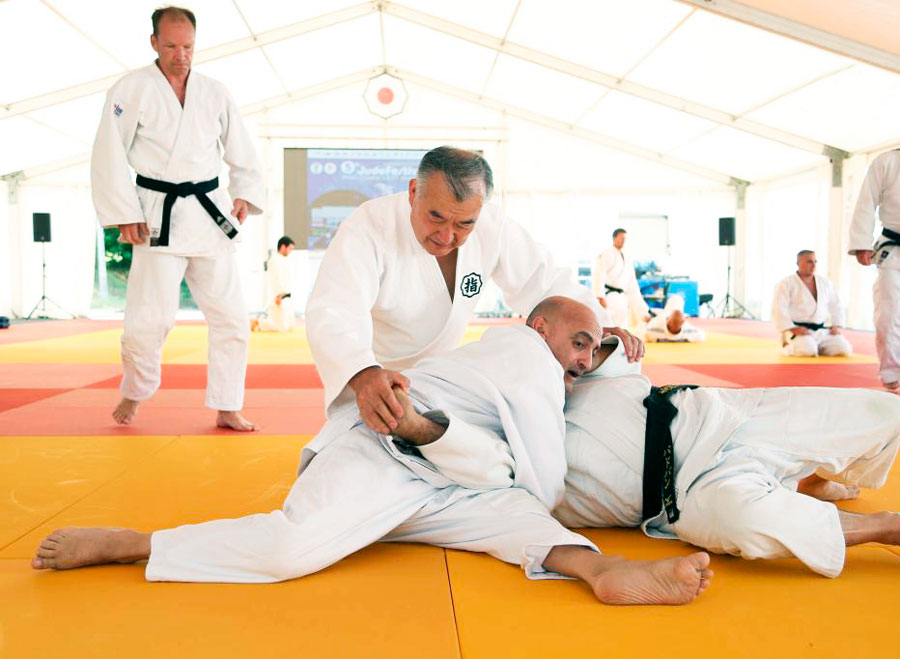 Certainly, this was the first time in the judo world history that an effective member of the faculty of the Kodokan Institute has been prevented from teaching courses by a country, member of the International Judo Federation and that maintains a close link with Japanese judo and the government of the Japan.

As a disciple of Jigoro Kano’s school, the renowned professor Naoki Murata would come to Brazil only to transmit the knowledge he acquired with direct students of the creator of judo. When he was in the city of São Paulo, in May 2015, as part of a Japanese delegation that included Haruki Uemura, president of the Kodokan Institute, Murata taught 374 teachers from all over the country who went to the Excellence Sports Center in Ibirapuera to have such a honor. If he had come to Brazil in February, he would have lectured to the 1.486 teachers and technicians who attended the FPJudô 2020 Technical Accreditation. 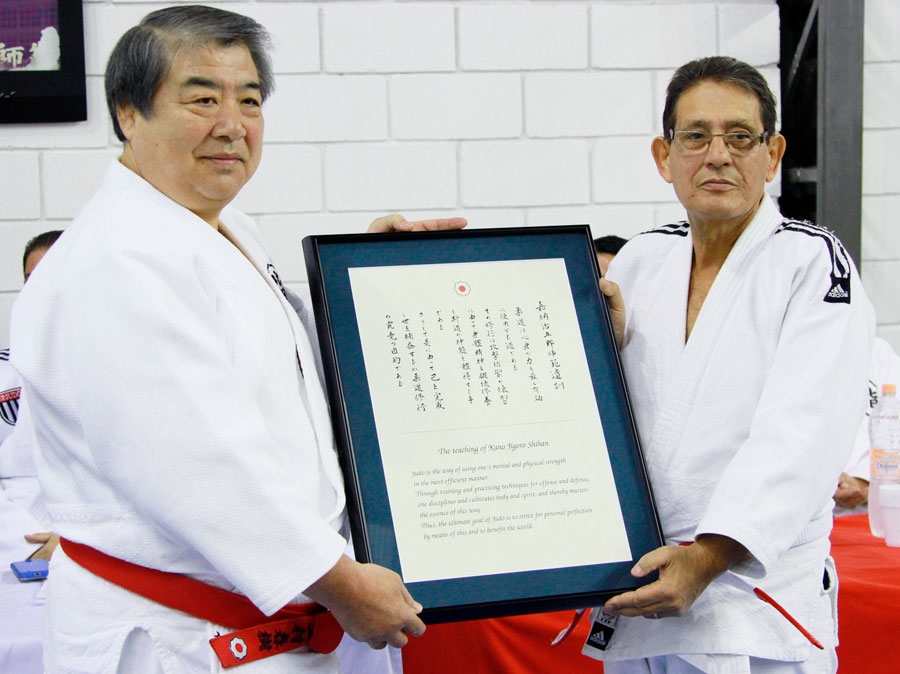 After slowing down the development of the Judo Federation of Santa Catarina state and, implementing the same style to CBJ’s management, it seems that now Silvio Acacio Borges is determined to withhold FPJudo to keep up with its progression – and hopefully this will be his last big mistake in front of CBJ

Worse, the national judo leader clearly shows that he ignores or underestimates the most basic symbolic, ritualistic and philosophical aspects of Kodokan Judo, grossly trampling the tradition, friendship and courtesy that unite Brazilian and Japanese judo. In addition to being shameful and mean, his gesture was a deplorable act.

Definitely, the president of CBJ works with Judo, but the Judo, as we know it, admire and created by Jigoro Kano, was never part of his administration. 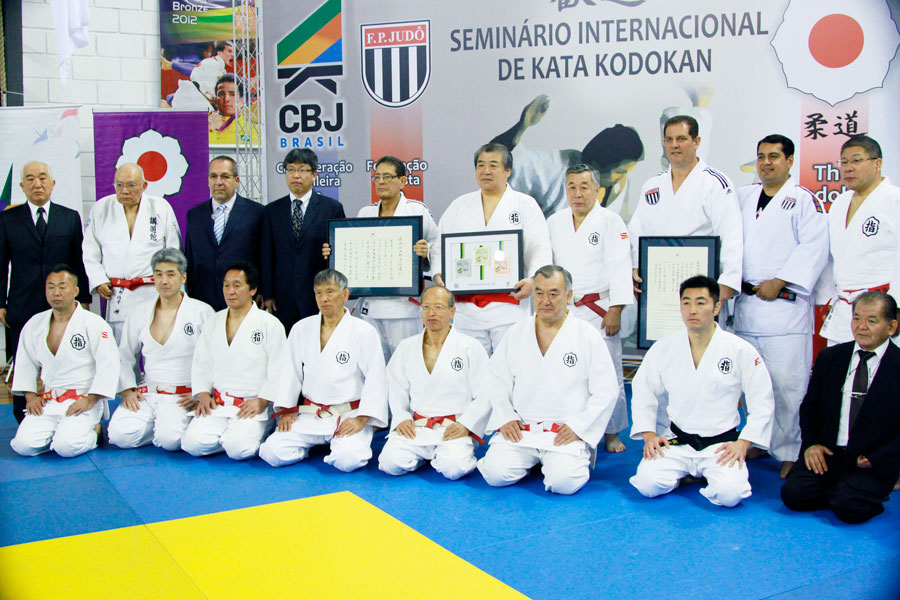 Leaders, teachers, political and consular authorities at the close of the seminar of the Kodokan Institute held in 2015