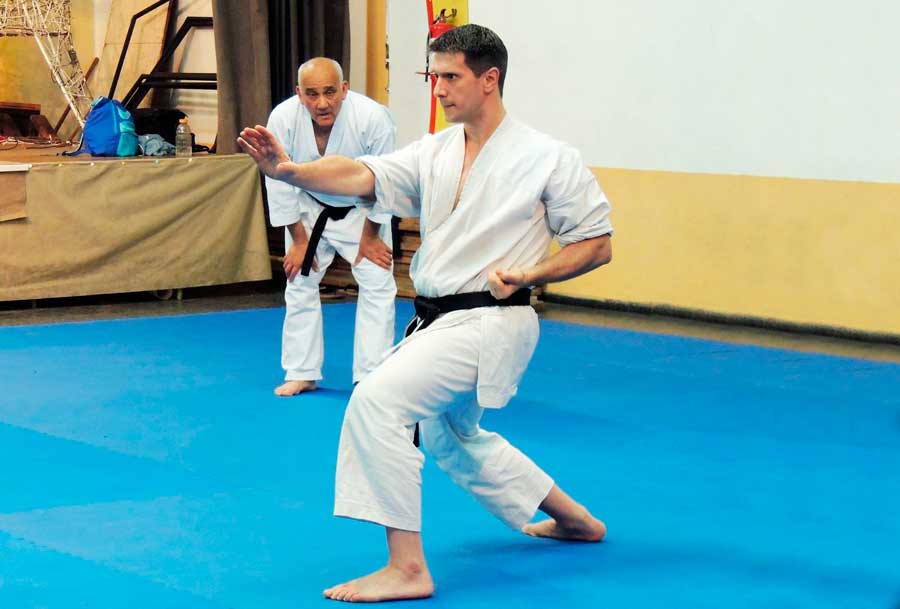 With a shoshin posture (student), Jorge Crosa trains under the watchful eye of sensei Carlos Alfaro, his mentor at ITKF

One of the newest leaders of the ITKF, Crosa proposes karate beyond the search for medals and seeks to reconstruct the martial art to its fullest

Determined and extremely objective, Jorge Alejandro Crosa Pérez, president of the Traditional Karate Association of Uruguay, is among the most resolute and proactive national leaders of the new generation International Traditional Karate Federation (ITKF). 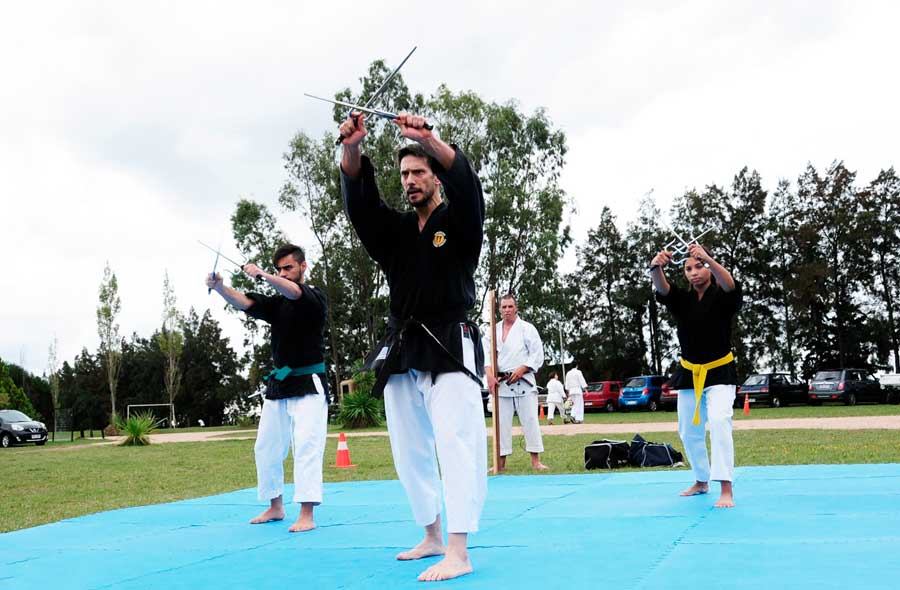 The Uruguayan leader started practicing Shotokan karate at the age of 9 and obtained the black belt sho-dan at 14, on June 11, 1989, the youngest member of the Uruguayan Karate Federation (FUK), the ITKF’s official representative at the time.

“Around 1997, I stopped practicing karate in order to graduate and after reaching this goal I decided to resume practice and teaching, aimed at children and young people at risk, starting the activities of Seishin Dojô, in the orbit of Nucleus G of city ​​of Montevideo”, said the leader. 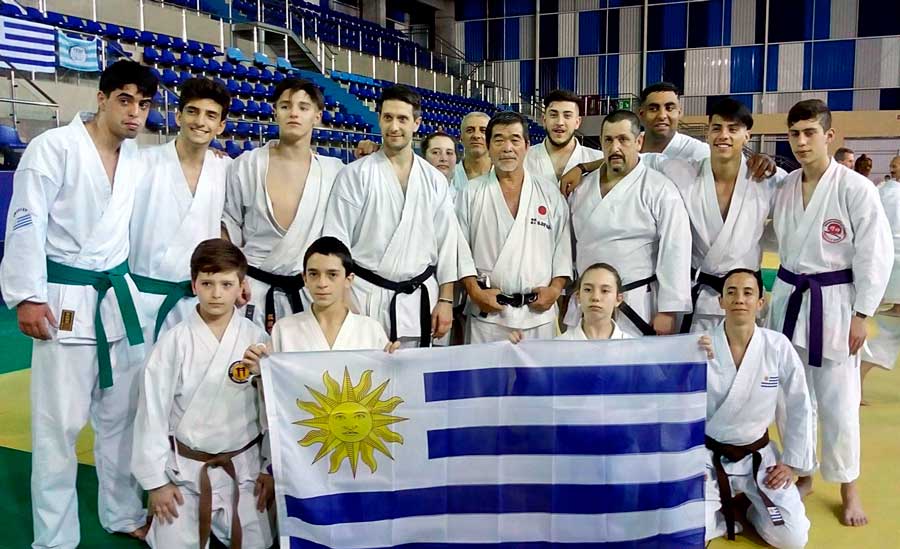 Experience and youth together show Uruguay opening the way to the world with the vocation to learn at the ITKF Master Course held in Salvador (BA), Uruguayan team with Yoshizo Machida shihan

Sensei Crosa revealed to Budô that from 2012 karate and kobudô passed and coexisted in his school, since in kobudô he found the ideal complement, to understand many intrinsic meanings of budo and to dispel myths that have been instilled in him since he started practicing of Empty Hands Art.

“Taking a deep look back at my karate career, in 2012 I decided to start practicing kobudo, a martial art for handling various weapons created on the island of Okinawa (Japan), under the guidance of sensei Mariano Melfi, shichi-dan (7th dan) from Shorin Ryu Shidokan Okinawa and yon-dan (4th dan) from Jinbukai Okinawa Kobudô, graduating in 2017 as sho-dan”, continued the leader. 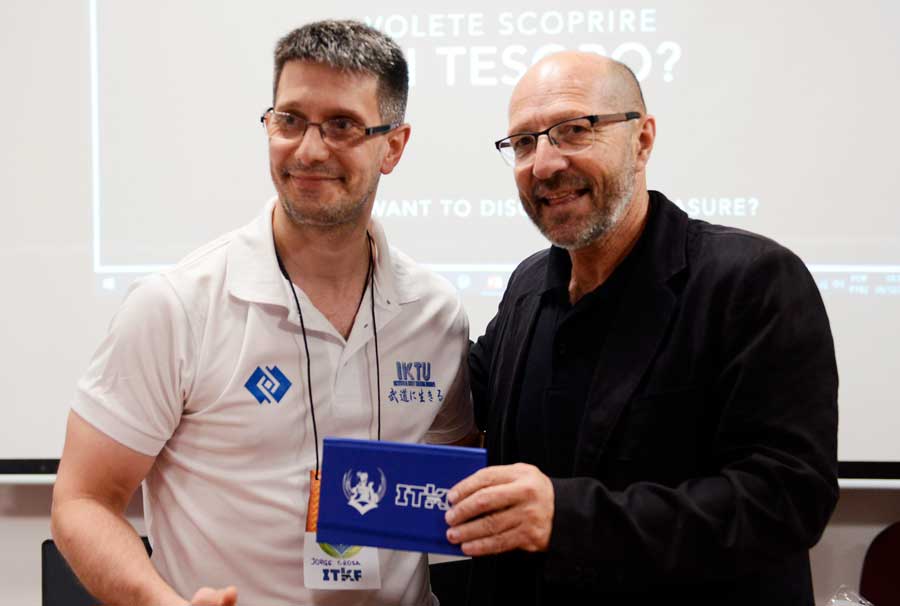 Professor Crossa is honored by Gilberto Gaertner, during the 2019 ITKF International Congress

Jorge Crosa attributes his ability to speak and the ease of communication to his family background and academic background.

“I am the son and grandson of journalists, I have always been connected to the world of design and audiovisual production. I graduated as a senior designer at a time when little was said about this specialization in Uruguay. I later studied architecture, while training with the national karate team, until I formed a family and my personal projects changed. Today I have two children practicing karate: Franco is sho-dan and is 20 years old; he was a bronze medal in kumite at the UWK / ITKF unified world championship, held in Montecattini, Italy. Santiago, 14, is the third kyu and is the current Pan American champion in his category, ”he explained. 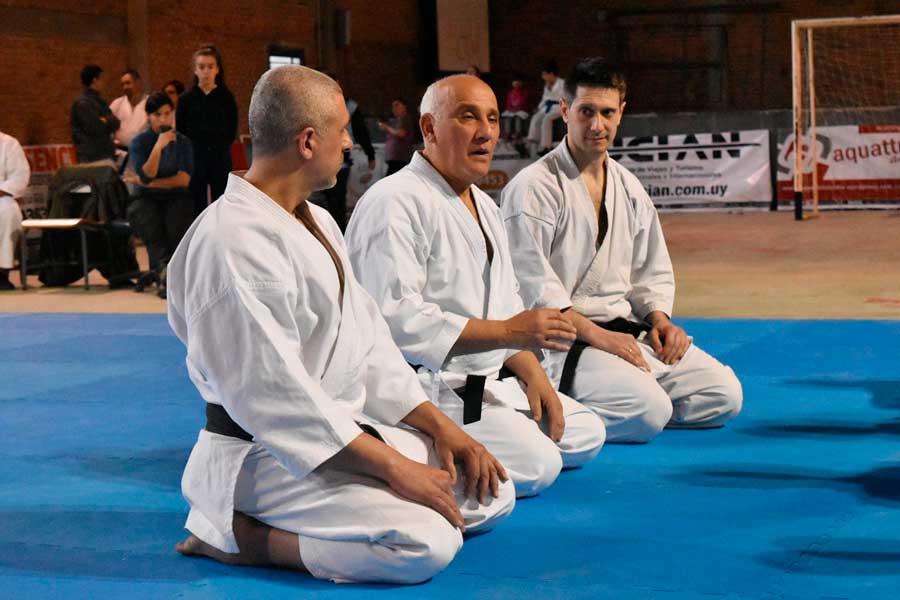 In seiza, professor Crossa listens to Alfaro sensei to whom he dedicates enormous respect and gratitude

In 2008, after finishing his studies and returning to the practice of karate, Crosa trained with professors of various styles, such as Goju Ryu, Shorin Ryu, Kyokushin and others. Hence the idea to unify efforts to spread the practice of all of them. On December 15, 2010, the Uruguayan Traditional Karate Institute (IKTU) was formally inaugurated, the cornerstone of the Uruguayan Association of Traditional Karate (AUKT), founded on August 31, 2015, which today officially represents the country in the International Karate Federation Traditional (ITKF). 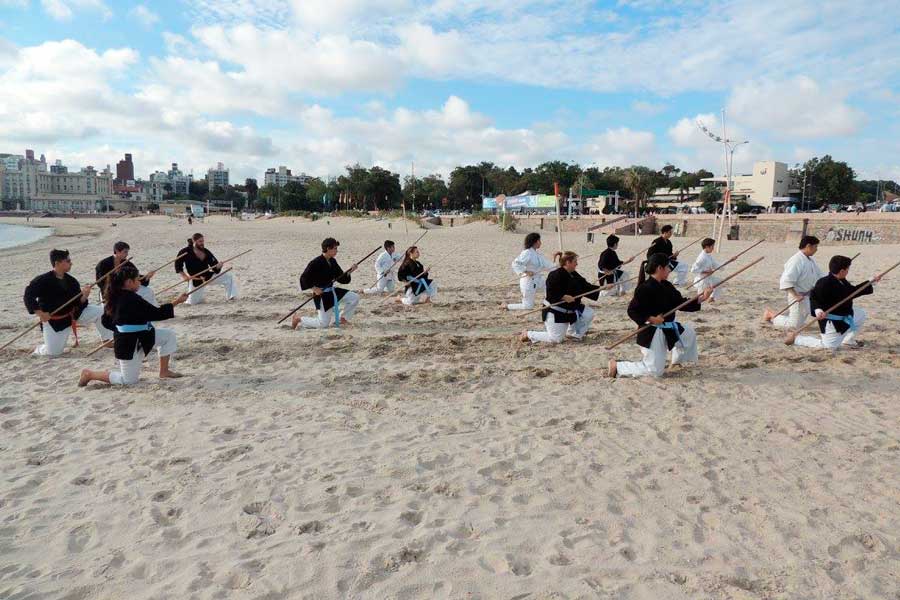 In the interview with Budô, Crosa spoke about his personal relationship with the shihan Hidetaka Nishiyama. “I only had the opportunity to witness a course he took in 1988, when he was in Uruguay, at Club Atenas, an emblematic place where years later, as a manager, I held the ITKF Pan American Selections Championship. When I resumed karate, Shihan Nishiyama died shortly thereafter, but I was honored to have been a student of one of his longtime disciples, Professor Carlos Alfaro Macherone, with whom I still have martial and family contact.” 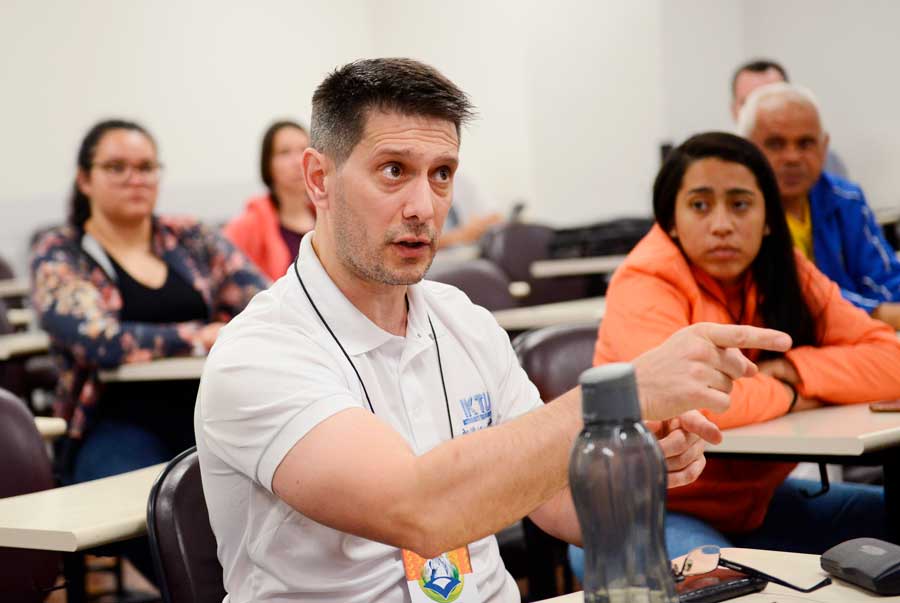 The adversities experienced by Crosa from the first steps in the dojo inspired his main objective as a manager. “Karate practice brought me a lot of joy and a lot of problems. Fortunately, in the balance of life, joys have always prevailed and that is why I keep going. Now, one of my main goals and challenges is to unite traditional karate as a whole, and this is not being easy. But, in the immense legacy of sensei Nishiyama is the example of persisting and never giving up.” 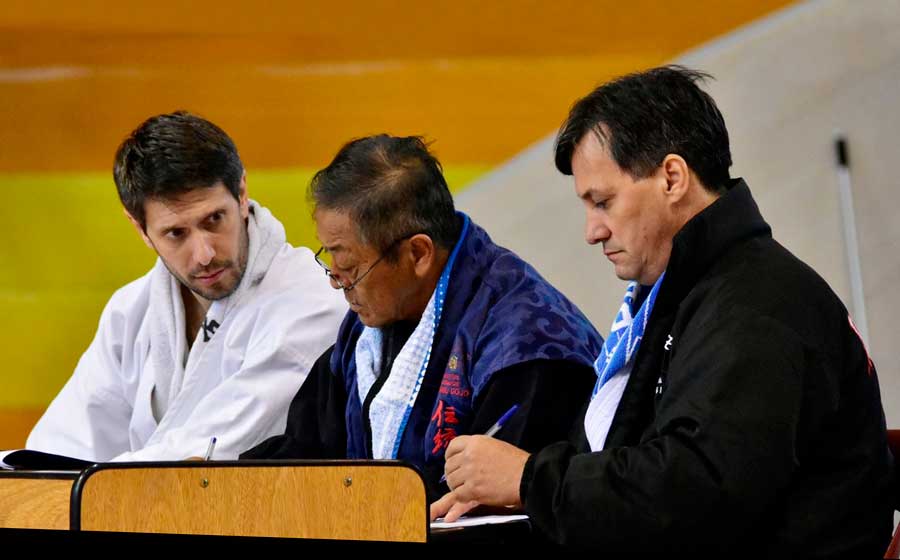 Along with sensei Clovis Astrissi, Jorge Crosa shows respect and admiration for Tasuke Watanabe for the permanent transmission of the fundamentals and principles of ITKF karate

From 2013 until today, the AUKT board has prepared a management plan for sports teams and an academic plan for affiliated schools. “In both sectors we have been growing slowly, but surely. At the sporting level, the most important milestone was the achievement of gold medals in individual kata and kumite by teams at the world championship held in Curitiba, in December 2019. Both feats had never been achieved by our country and will be recorded on the retina and in the sentiments of all Uruguayan karatekas”, recalled the president of the Uruguayan Association of Traditional Karate. 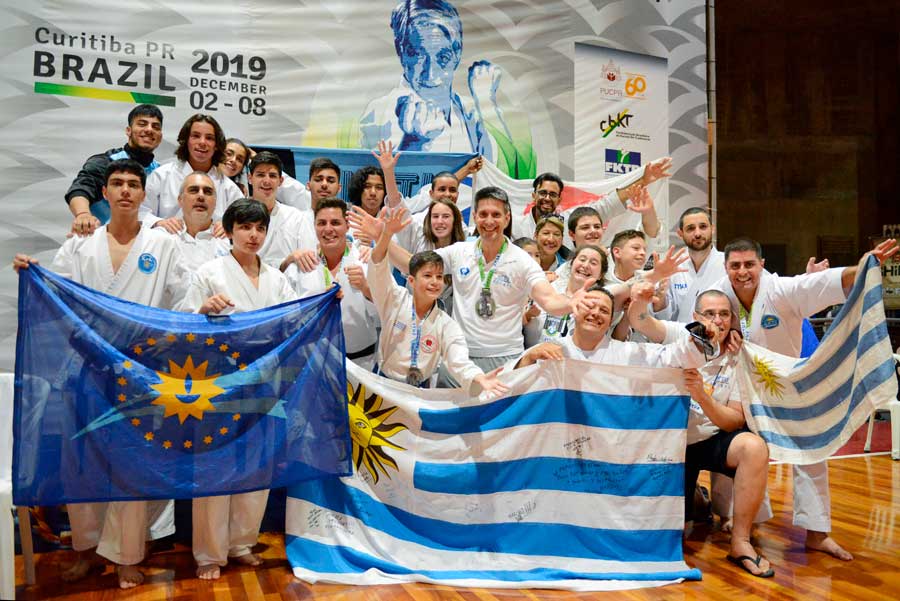 The Uruguayan team always showing the joy of being Celeste

In the political and institutional field, Crosa’s greatest pride is in acting and today at the continental and global level. “The ITKF leadership has entrusted me with the privilege of holding important and responsible positions. Our chairman Gilberto Gaertner has an innovative and forward-looking management and, fortunately, is giving me a great boost. I am grateful and totally committed to a management that is restructuring our organization”, he said. 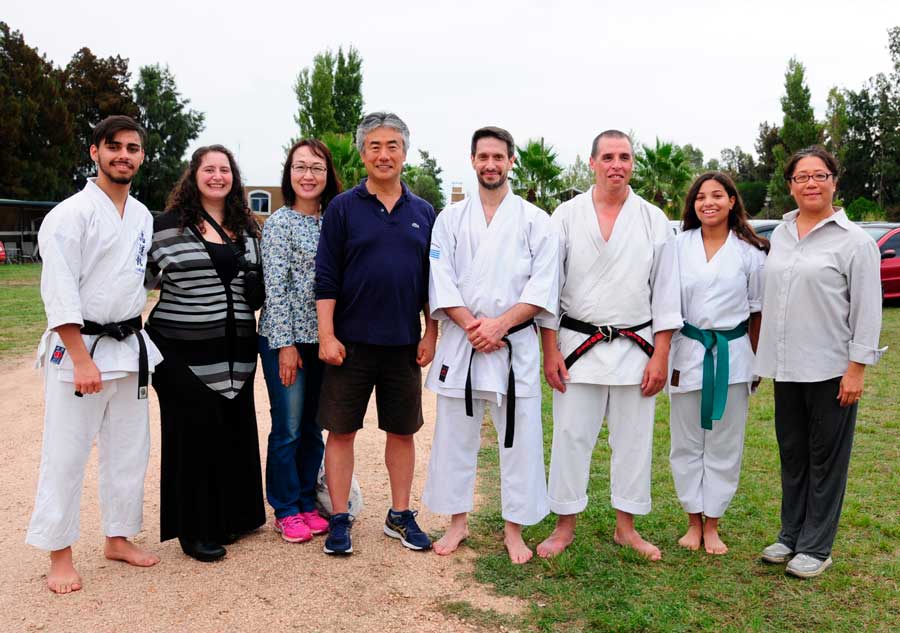 Proving permanent cultural cooperation with the Japanese community in Uruguay, sensei Crosa and team with Tatshuhiro Shindo and wife at the 2019 bonenkai

Jorge Crosa revealed AUKT’s projects and goals for 2021, after a year marked by a worldwide public health problem. “First, we have to consolidate the base of dojos and practitioners in each cell of the organization, since the pandemic has seriously affected the economic and financial continuity of several schools. Second, we are going to consolidate the bond of karate within the scope of the national government of Uruguay, to which we have offered an enormous contribution to the professionalization of the staff of teachers. Finally, we have to consolidate a teaching program at the level of municipal governments in the 19 states of Uruguay. ” 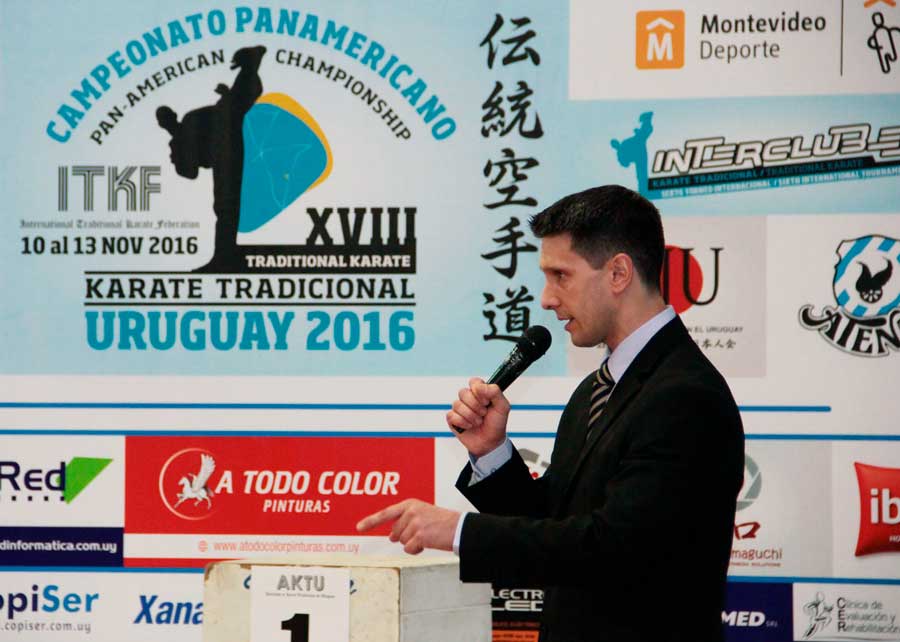 Transformed into a young sports leader, the former athlete displays initiatives and ideas to carry out the resurrection of the traditional in Uruguay

AUKT registers around 500 federated practitioners, of which 10% are graduated from sho-dan. “We had a significant change with the pandemic, but we stayed true to the planning we had done. Today, about 50 athletes dedicate themselves hard to obtain national and international titles. We currently have 16 dojos affiliated in four states. In the world context they are small numbers, but for the Uruguayan reality it is a respectable number of practitioners”, informed the leader. 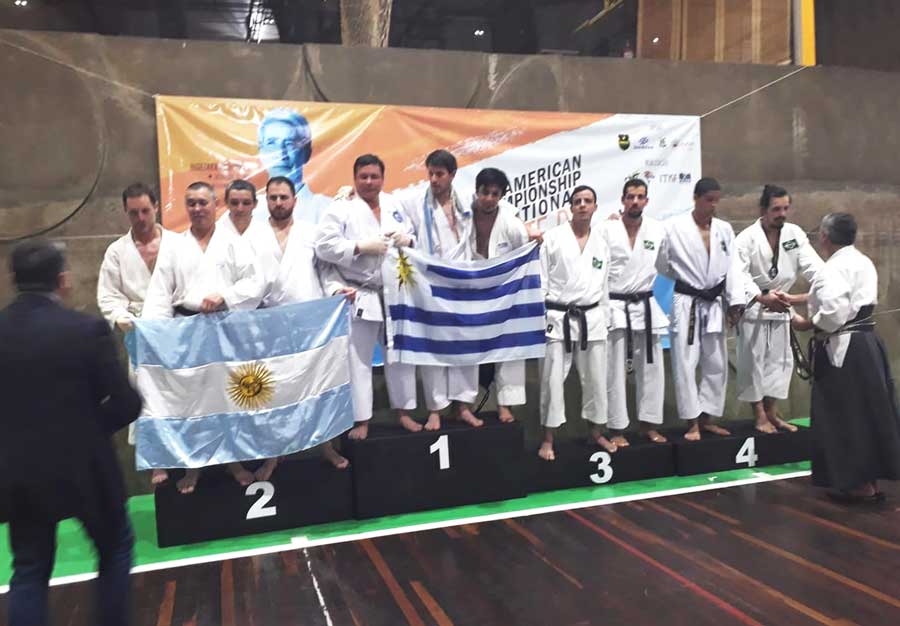 For Crosa, the pandemic made it possible to take a look at the essence of Professor Nishiyama’s proposal. “I think that we live a great moment in order to strengthen our pedagogical and socio-educational project, not only due to the global health crisis that inhibits almost all classroom activities, but because we need to seek the assurance of what we do and what we propose while teachers based on the budô ”, confided the leader.

“Unfortunately,” he added, “for many years Shotokan schools have melted the teaching of the martial aspects of karate in favor of competition, and this, in my personal opinion, has weakened us as a school, as a dô and especially as a budo. Fortunately, our leaders today are moving in another direction and looking for something bigger. I believe that the ITKF treats karate much more broadly, exceeding the limits of kata, kumite and medals. It is time to look inside, deconstruct what is wrong and then rebuild karate in its entirety. Understanding what we do and what we seek is essential for the resurgence of a much more martial organization, based, however, on the social, inclusion and innovation. We live on the threshold of the past and the future, and we have to define this very well. Take it or leave it.” 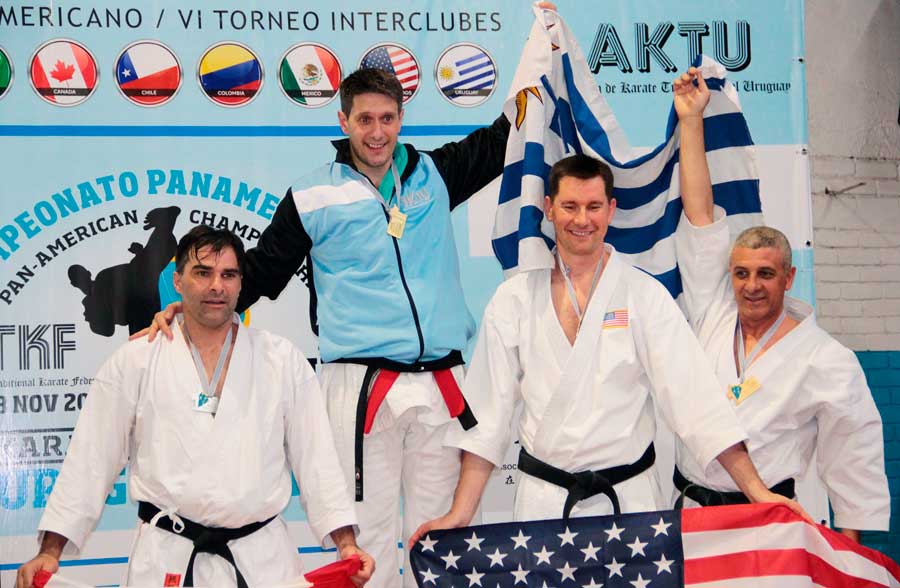 Sensei Crosa ended the interview by projecting what he thinks is necessary to popularize and foster the sustainable growth of traditional karate on a global scale.

“The current ITKF presidency proposes the real integration of styles, truly promoting the concept of traditional karate, above schools and flags. The goal is to innovate, integrating and linking Okinawa to Japan. I believe that from then on the ITKF will be able to play a historic role, becoming the spontaneous engine of traditional world karate. There is a lot of work to be done, but the first steps are being taken. I continue to insist that the academic should have priority over the sport; the key to growth points to this path. If we can associate or establish a strategic union with Unicef, with more than 150 countries aligned, I believe that we will have an excellent combination of culture and sport for the benefit of the new generations and we will be effectively fulfilling our role as teachers and as budokas”, explained the president of AUKT. 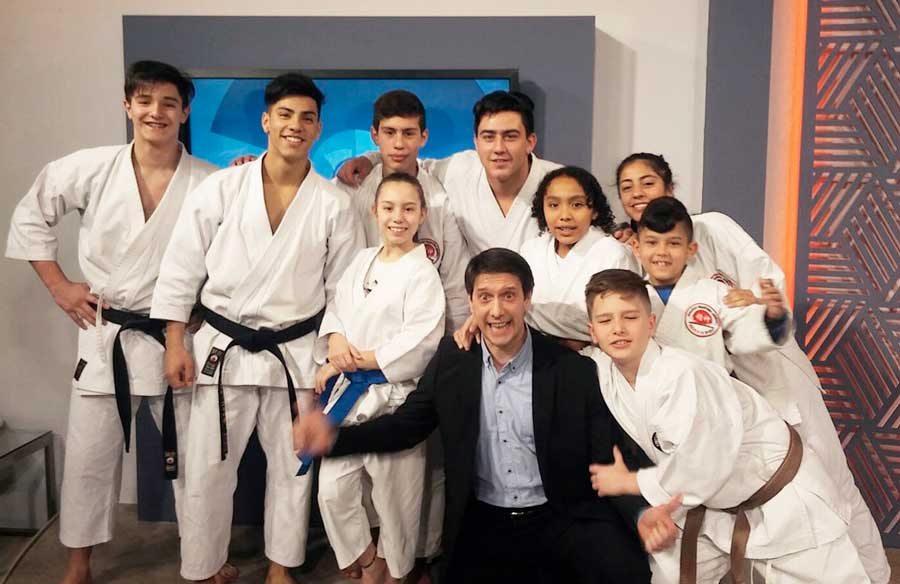 The example is not only given with seriousness and rigidity; contagious joy is always the best stimulus for learning 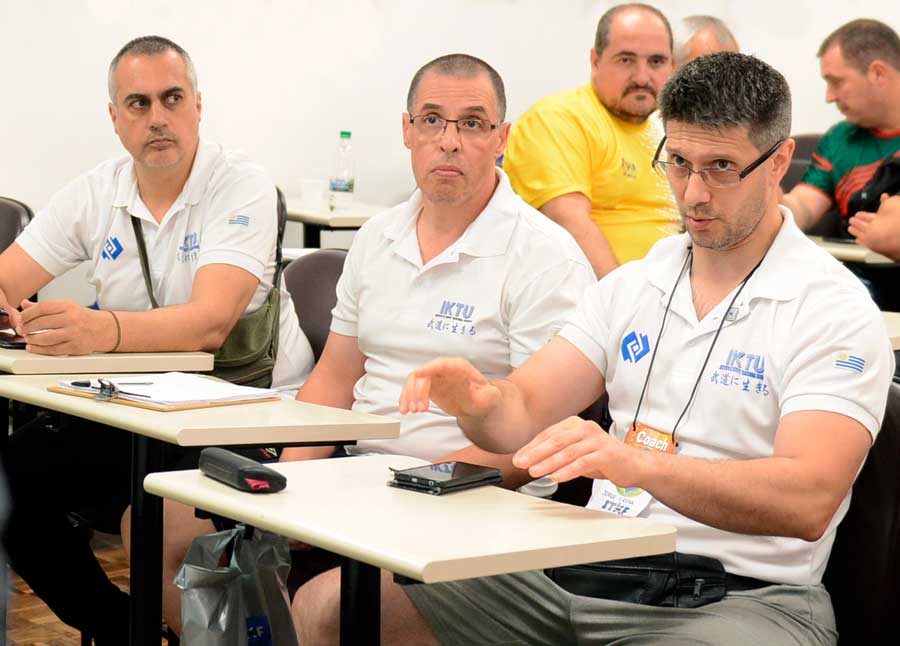 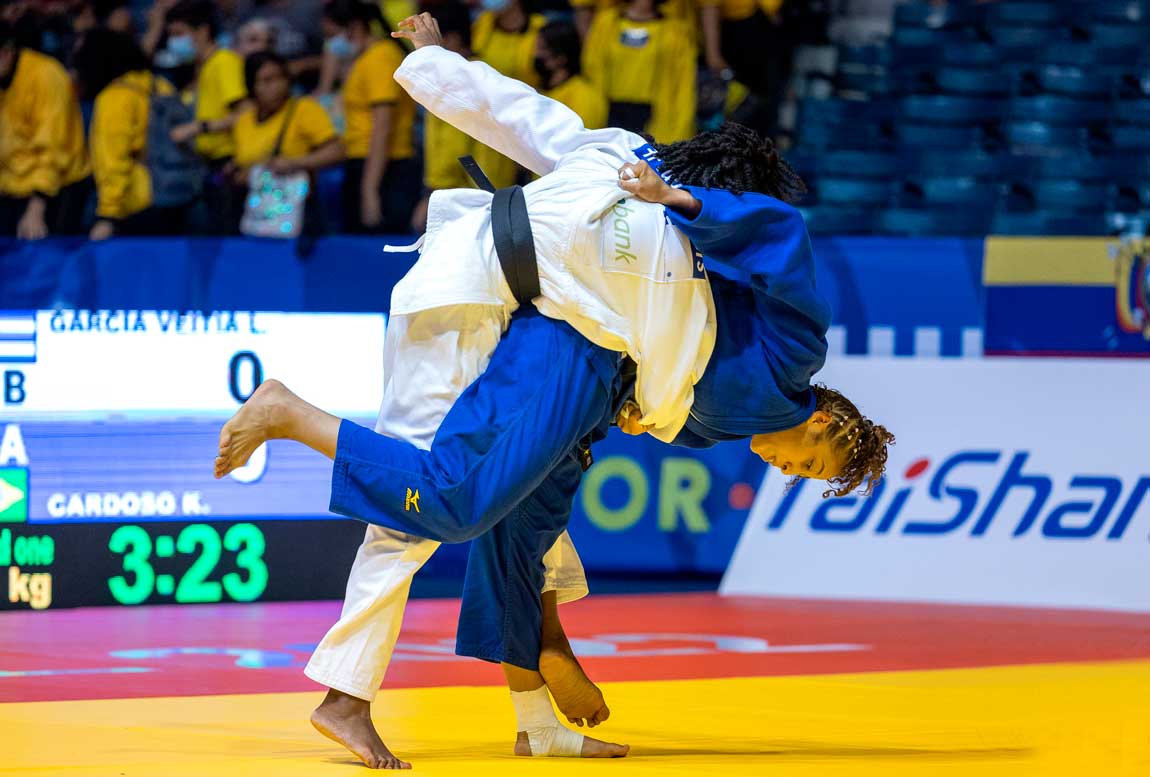 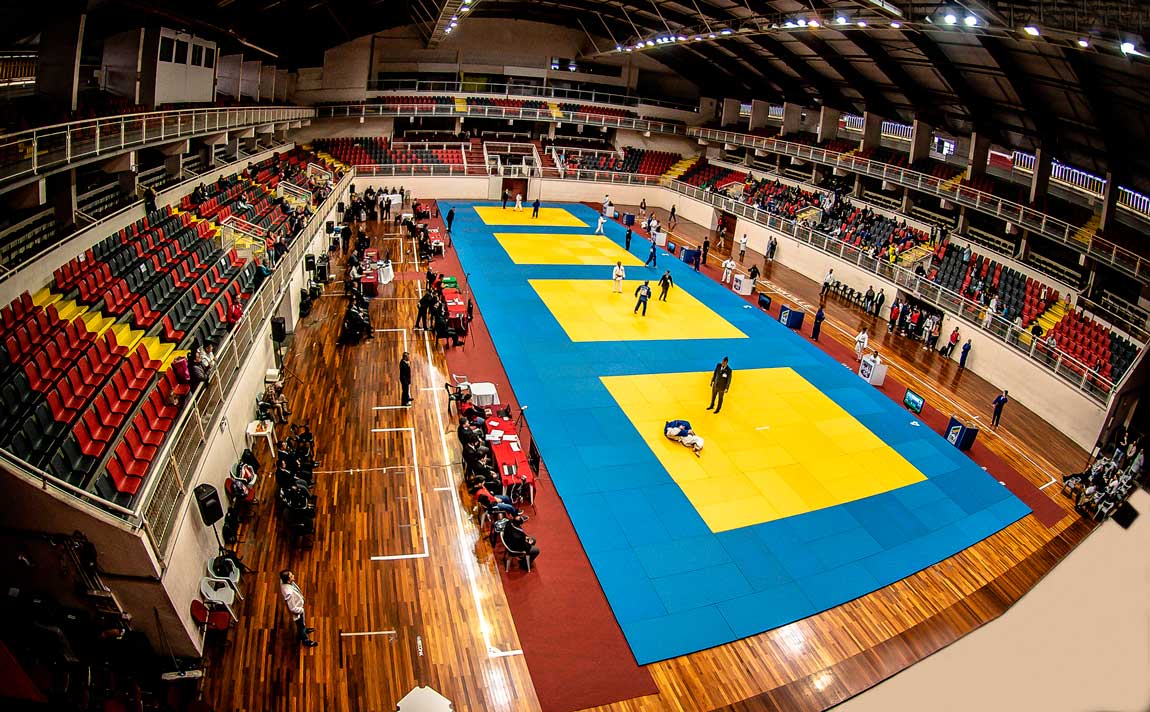